Ireland and boxing are two things I really love.

I grew up with boxing. It was a sport I often enjoyed alongside my father: Speaker Tip O’Neill.

I think I attended every Paul Pender and Marvin Hagler fight that came to the old Boston Garden. This region has a great history with boxing: Hagler, Pender, Rocky Marciano, John Ruiz, Tony DeMarco, Joe DeNucci – and of course John L. Sullivan.

It’s great to see the sport return in such a big way to the spot where I enjoyed so many matches: Fight Night Boston is Saturday, Oct. 20 at TD Garden.

But I have to admit I can’t help rooting most for the one they call the “Queen of Ireland” – Katie Taylor. She is facing off against Cindy Serrano for the IBF & WBA World Lightweight Championship.

Taylor has become an icon, not just for boxing, but also for her country. Born in Bray, Country Wicklow, Ireland, Taylor’s athletic career began in soccer. Although she was training for boxing from age 11, Katie represented the Republic of Ireland in the under-17, under-19, and senior levels of soccer. During her club soccer years, Taylor often credited her boxing training as a key to her success on the field, saying it gave her a physical advantage over the other players. Taylor’s soccer career led her all the way to the 2011 FIFA World Cup qualifier in which Ireland faced Kazakhstan. 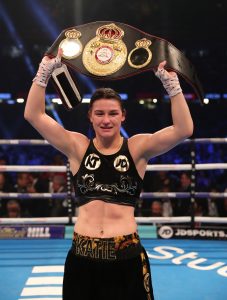 In 2016, Katie Taylor began her professional boxing career under Matchroom Boxing. She joined a card at Wembley Arena in London where she beat Karina Kopinska in three rounds. By October of 2017, Taylor had claimed the WBA female lightweight title, which she has held since. She has held the IBF title since April of 2018, making her the unified lightweight female world champion. Katie boasts a 10-0 record with five knockout wins.

Taylor is known for her fast-paced and aggressive style of boxing, and she will be sure to have an exciting fight at the TD Garden against Cindy Serrano of Puerto Rico, with a record of 27-5, with 10 knockouts.