Thousands of elevators in buildings across Massachusetts are going uninspected long past the expiration date on their most recent safety checks. And it’s a problem that’s getting worse even though state officials have been pledging reform for years. The Boston Business Journal takes a fascinating – and alarming – look inside the Massachusetts elevator safety program.

Key findings of the BBJ Special Report by Greg Ryan:

“Greg Ryan, who reported this story for us, got a tip about problems with the state’s elevator inspections late last year. To get a handle on how bad the situation was, he needed to file multiple public records requests with various agencies, and the project just snowballed from there,” said Boston Business Journal Managing Editor Don Seiffert, who worked with Ryan as the project editor. “The central questions we sought to answer were how much of a health and safety threat the state’s lax inspection record poses, and why, after these inspections have been cited as a problem in Massachusetts for decades now, this remains such a chronic issue.” 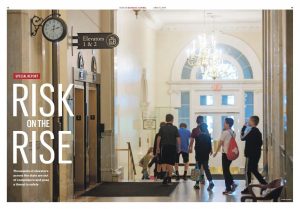