Massachusetts Beverage Association is partnering with the organizations

and providing support for the ‘Take Care’ campaign.

Chatham, MA – CARE for the Cape & Islands, the Cape Cod Anti-Litter Coalition and the Massachusetts Beverage Association today announced the launch of the  ‘Take Care’ campaign – aimed at promoting recycling in all communities on the Cape this summer and keeping public spaces litter free.

Public service signage in visible locations all over Cape Cod, point of sale messages at convenience, food and other retail stores, and a digital advertising campaign using high-traffic media properties will each be components of the initiative. In all more than one million residents and visitors to Cape Cod will be reached by the ‘Take Care’ messaging this summer.

“This campaign is designed to catch people’s attention and promote a fun but important reminder to consumers that recycling plays an important role in our efforts to keep Cape Cod pristine,” said Jill Talladay, Founder and Executive Director of CARE for the Cape & Islands. “The artwork will be displayed in a variety of settings, such as grocery and convenience stores, public spaces like beaches, parks and marinas, as well as through local networks to reach tourists and full-time residents alike.”

At the official campaign launch event for ‘Take Care’ – held Thursday, July 1 at Kate Gould Park in Chatham – Talladay said campaign organizers “felt unified messaging that visitors and residents were seeing from town to town would have a greater effect.”

“We saw a need to expand what we were doing with Take Care,” Talladay said. “With the generous support of the Massachusetts Beverage Association we were able to create new artwork (and) a mascot … to promote reduce, reuse, recycle.”

The Take Care signage, point of sale messaging and digital ads feature a smiling blue whale with a seagull perched on its head, and a brightly colored ‘Cape Cod Recycles’ flag.

Other campaign supporters include the Center for Coastal Studies, the Cape Cod Chamber of Commerce, the Massachusetts Food Association, the New England Convenience Store and Energy Marketers Association, Chatham Recycles and local officials and business owners. 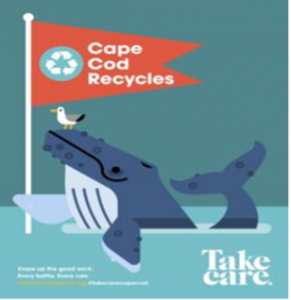 “It’s hard to get people to understand where litter happens and why we need to take care of it. We are a tourist destination. We need the Cape to look beautiful all the time. It is our job to educate businesses, government officials, and residents on how to do this,” said Meg Morris, Co-Founder and President of the Cape Cod Anti-Litter Coalition, at the launch event. “Litter is recyclables and trash that wasn’t disposed of properly so that’s why we are promoting recycling and the Take Care Cape Cod campaign.”

Steve Boksanski, president of the Massachusetts Beverage Association, said the state’s leading beverage companies are committed to improving the rate of recycling of the industry-standard PET plastic bottles – which are designed to be 100 percent recyclable. Redemption rates since 2010 have declined 28 percent. MBA and its partners believe education and awareness can produce results in driving more and more plastic bottles into the recycled materials stream.

“We all work together to find solutions to problems that confront us as a society. In 2012 Mass Beverage started a campaign for recycling. This year we wanted to do something different. We came up with an idea to work with Take Care and create messaging around recycling,” Boksanski said at the Chatham campaign launch event. “Public service announcements like this – we don’t have enough of them. We can’t do it alone and we are asking for everyone’s help to recycle.”