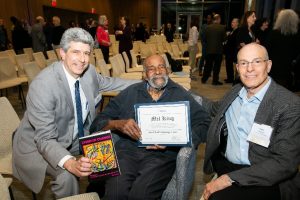 It was a celebration 40 years in the making. On Thursday, March 14th, members of the Commonwealth’s community development sector joined the Community Economic Development Assistance Corporation (CEDAC) in honoring former state representative Mel King for his vision and effort in helping to create the community development financial institution in 1978.

King, a legendary community organizer, convened a series of weekly working group sessions in the 1970s – called the Wednesday Morning Breakfast Club – that eventually led to CEDAC’s establishment as a public/private agency.  Additionally, he sponsored the legislation, signed by Governor Michael Dukakis, to create the organization.  King was on hand at the event, which was held at MIT’s Samberg Conference Center, and also took a few moments to address the attendees.

Massachusetts is a leader in community development, in large part because of the infrastructure that was established in this period.  Since the late 1970s, CEDAC has committed over $402 million in early stage project financing, which has helped to produce or preserve almost 50,000 affordable housing units in Massachusetts.  The organization also manages a number of supportive housing bond programs on behalf of the state’s Department of Housing and Community Development (DHCD). Those programs have committed more than $490 million in the past three decades.

You can see more of CEDAC’s history and accomplishments in their 2018 annual report, which includes an interactive timeline.  Additionally, you can read more about the individual projects they’ve worked on in the March 11th issue of Banker and Tradesman and hear more at the OA on Air podcast (full interview available here).

You can read more about CEDAC’s 40th anniversary event – and see pictures – at their blog INSITES or follow them on Twitter at @CEDACma. 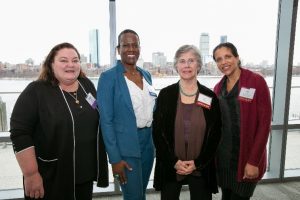