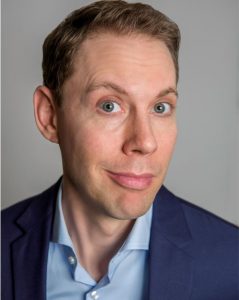 (Boston, MA) – September 17, 2021 – National Braille Press (NBP) will host the annual “Million Laughs for Literacy” gala on Thursday, October 14, at 6:00pm at the State Room in Boston, as well as provide virtual access. This year’s gala will be headlined by comedian Ryan Hamilton and guest remarks from Laura Wolk, the first blind woman to clerk at the U.S. Supreme Court.

“After a long year we are excited to have the opportunity to host our annual gala as a hybrid event and celebrate braille literacy,” said Brian MacDonald, President of National Braille Press. “Over the last year, we were fortunate enough to be able to carry on producing books and materials in braille for the blind and people with low vision to continue to increase braille literacy. At the gala, we want to showcase the many ‘faces of braille’ which is this year’s event theme.”

Ryan Hamilton’s one-hour Netflix stand-up special, Happy Face, has been reviewed as “the special you can’t watch enough times.” This has been followed by a wealth of television appearances and a non-stop headlining tour. Armed with the unique perspective of growing up in rural Idaho to become a favorite in the New York stand-up comedy scene, he’s one-of-a-kind. He’s been named one of Rolling Stone’s Five Comics to Watch; and his recent appearances include The Tonight Show Starring Jimmy Fallon, The Late Show with Stephen Colbert, and Conan, as well as opening spots for Jerry Seinfeld and Jim Gaffigan.

For more than 15 years, the A Million Laughs for Literacy gala has raised millions of dollars to support National Braille Press’ Braille Literacy Programs which exist to ensure blind and visually impaired children are given an equal chance to read. Braille typically costs three times more to produce than the same materials in print, but NBP strives to make sure blind individuals do not have to pay more for the same information. Learning braille is the key to independence and employment opportunities for blind individuals.

The Gala program also includes remarks from Laura Wolk, the first blind woman to clerk at the U.S. Supreme Court. Wolk has been blind since 15 months old, and she learned to read braille at age three. A graduate of Notre Dame Law School, Wolk clerked for Justice Clarence Thomas and is now an Associate at Kirkland & Ellis, LLP in Washington, DC. 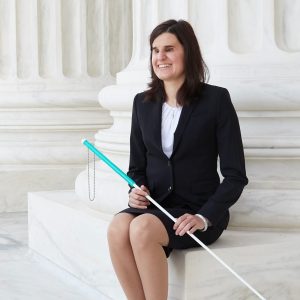 The Co-Chairs for the NBP “A Million Laughs” for Literacy Gala include Ted Truscott, CEO of Columbia Threadneedle Investments| Global Investment Management Group, and his wife Kathy; and Tom Sullivan, Founder of Lumber Liquidators, Proton, Cabinets to Go, Chateau GABY and Gracious Home.

National Braille Press is a non-profit braille publisher and producer of braille products. NBP creates products and programs to support braille literacy in the blind community and to provide access to information that empower blind people to actively engage in work, family, and community. For more information visit www.nbp.org