Congratulations to our client Noelle Lambert of The Born To Run Foundation, Recipient of the Myra Kraft Community MVP Award from the New England Patriots Foundation 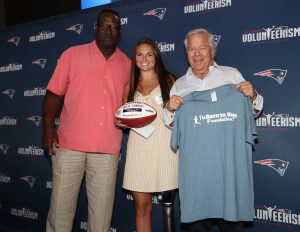 Noelle Lambert of Manchester, N.H. awarded $10,000 grant for The Born to Run Foundation.

FOXBOROUGH, Mass. — Every year since 1998, the Kraft family and the New England Patriots have been celebrating those who give their time to help others. The program was originally known as the Community Quarterback Awards and were presented to those who exemplify leadership, dedication and a commitment to improving their communities through volunteerism.

In 2011, the awards were renamed in honor of the late Myra Kraft who committed her life to volunteering.  As part of the New England Patriots Foundation’s ongoing Celebrate Volunteerism initiative, the Kraft family hosts a special luncheon each year to show their appreciation for local volunteers.

On Tuesday, Aug. 20, 26 volunteers were recognized for their contributions at an awards ceremony at Gillette Stadium. Twenty-five organizations received grants of $10,000 in honor of their outstanding volunteers and one grand prize winner received a surprise $25,000 donation.

“This event has always been one of my favorites because it not only highlights the organization that is positively impacting the lives of others in our communities, but it also allows us to shine a spotlight on each organization’s most-deserving volunteer,” said Robert Kraft. “The stories describing the many volunteers who are nominated each year are inspirational. They serve as a reminder of how much good there really is in the world and how committed some people are to making their community a better place.”

Noelle Lambert of Manchester, N.H. was selected as one of this year’s $10,000 winners for her volunteer efforts at The Born to Run Foundation in Medfield, Mass.

Back in 2016, Noelle lost her leg in a moped accident. At the time, she was a college student, playing division 1 lacrosse at UMass Lowell. During her rehabilitation from her injury, she learned that many young amputees do not have the financial resources to obtain artificial limbs. As an amputee-athlete, Noelle was determined to help other amputees lead fulfilling and active lives.

“Since I had my accident, I was determined to not let it define who I was,” said Noelle. “I also wanted to give back to others who need help in obtaining artificial limbs for athletics.”

She later established the Born to Run Foundation and has helped four young people to pay for expensive athletic prostheses. Having made a return to the college lacrosse field, Noelle serves as an inspiration to young athletes. She shares her story and encourages young amputees to live their lives to the fullest. She is currently trying out for the 2020 Paralympics in Tokyo, hoping to run the 100 meter sprint.

“The Born to Run Foundation is so very thankful to the Patriots Foundation in selecting Noelle for one of the Myra Kraft Community MVP Awards,” said the nonprofit in a statement. “Noelle has literally put her heart and soul into the foundation since she lost her left leg.”

“My accident was the best thing that ever happened to me,” said Noelle. “I was able to persevere through the trauma and discover a new purpose in life – to help others who have gone through similar life-defining ordeals.”

The 2019 Myra Kraft Community MVP winners range from 14 to 76 years old and represent every New England state. The selected nonprofits provide support for many causes, including education, domestic violence prevention, healthcare, homelessness, mentoring and military support. The Kraft family and the New England Patriots Foundation received more than 350 applications this year from nonprofit organizations looking to recognize their outstanding volunteers. Nominations open each spring and the awards are open to all nonprofit organizations in the New England region. For more information on the Myra Kraft Community MVP Awards, please visit www.patriots.com/community.