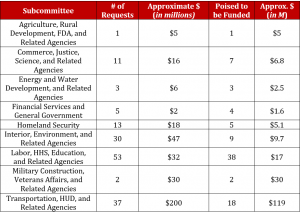 The Senate delegation from Connecticut focused heavily on transportation and infrastructure project requests. With more than $350 million in appropriation requests, the Senators secured over $190 million across 87 statewide and local projects, and more than half of the projects poised for funding were made through the THUD and Labor, HHS, and Education subcommittees. Three of these THUD approved requests were made by ConnDOT for bridge repairs and replacement, sidewalk construction, and rail station improvements. Under this same subcommittee, construction of a new Naugatuck Valley Regional Fire School and a new fire HQ in West Haven, CT were approved. The City of Bridgeport received over $10 million to accommodate the return of commercial air service to a regional airport in Stratford, CT.

The Bradley Air National Guard Base and the Naval Submarine Base of New London, CT each received just under $15 million for improvement projects with the Military Construction subcommittee. An additional $10 million was appropriated for a Coastal Zone Soil Survey to be performed by the state’s Natural Resource Conservation Service. The largest source of congressional directed funding for Connecticut was under the Labor, HHS, and Education title, bringing over $100 million for nonprofits and higher education organizations. The largest projects under this category included over $2 million for Nuvance Health to acquire equipment for a new outpatient health center, over $1 million for Goodwin University of Advanced Manufacturing at the University of Bridgeport, and $1.6 million for the Children’s Museum of Hartford’s STEAM initiative. Other smaller awards promoted literacy and arts for youth and supported the integration of mental health services and workforce development initiatives into existing regional and local nonprofit organization operations.

Representative Larson’s ten requests were all included in their relevant subcommittee texts, for a total of almost $6.5 million. Transportation, Housing and Urban Development projects were a main focus of the Congressman, with an emphasis place on property acquisition, construction, and renovation for municipalities and nonprofits such as East Hartford and the Connecticut Food Bank. Addressing food insecurity, flood damage, and gun violence were all priorities for the Congressman in his FY2022 requests.

Representative Courtney requested $16 million for his ten community project funding requests. All ten requests were included in their relevant subcommittee bills. Some main areas of focus for the Congressman were digital innovation, with the creation of a new program hub at Mitchel College, workforce development for CT’s public schools, municipal service upgrades of $1.4 million for local town hall renovations and police department dispatch and data system upgrades, and environmental mediation programs, funded at $2 million.

Chair DeLauro requested $16.5 million for her ten community project funding requests, and secured $14 million for nine of these requests. With an emphasis on community revitalization and municipal renovations and construction, Chair DeLauro is poised to bring CT $1.5 million for the Sterling House Community Center Food Pantry and Social Services programs, $3.4 million for PFAS treatment for the Durham public water supply, and $500,000 for the Wallingford Housing Authority to provide ADA upgrades for their facilities.  New Haven Public Schools is poised to institute a manufacturing workforce development program, with a $2 million federal investment and a local nonprofit academy secured $350,000 for a new recreational facility.

Representative Himes is poised to bring home $12.4 million for his ten project requests, which were all included in their relevant subcommittee texts. The USACE will received $2.8 million for a survey of local flood mitigation opportunities and regional nonprofit Save the Sound is poised to fund a dam removal project, with a $470,000 federal investment. Himes’ main focus was on the THUD title, with $3.4 million for two separate municipal sidewalk improvement projects. Other infrastructure projects included $2.2 million in facility construction upgrades for Sikorsky Memorial Airport and $2.6 million towards renovation projects for Stamford Housing Authority and the Center for Family Justice.

Representative Hayes requested and secured $10.5 million for ten community project funding requests. Public safety was a main area of emphasis for the requests, with $445,000 for pedestrian safety improvements and $424,000 for an Avon sidewalk project. Local emergency services also benefitted from investments for technology upgrades, funded at $3.2 million for Wolcott PD, $225,000 for a new Northfield fire facility, and a small police community youth outreach program in New Britain.