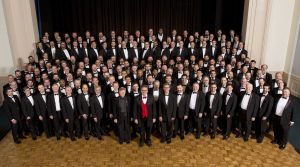 (Provincetown, Mass.) September 9, 2019 – Provincetown 400 today announced that the Boston Gay Men’s Chorus has been added to the program of events in September 2020, to commemorate the 400th anniversary of the Mayflower Pilgrims first landing in the new world in Provincetown in 1620.

On September 13, 2020, the Boston Gay Men’s Chorus, featuring up to 200 members, will arrive in Provincetown via ferry and will perform three selections that reflect the occasion during a ceremony to honor the Mayflower Pilgrims. An estimated 2,000 members of the General Society of Mayflower Descendants will attend a ceremony in Provincetown Harbor where they will lay a wreath in the Harbor to honor their ancestors. There will be a re-enactment of the signing of the Mayflower Compact, followed by a “Pilgrims Procession” by the GSMD, escorted by members of King Hiram’s Lodge of the Provincetown Masons and the New Plimmoth Gard who will march from Provincetown Harbor to the Pilgrim Monument where they will have lunch.

“We’re honored to participate in marking the historic arrival in Provincetown of the Pilgrims, who were seeking the freedom to worship and live as they chose, and to honor the Native People who were already here,” said Craig Coogan, executive director of Boston Gay Men’s Chorus. “Provincetown has long been a beacon of freedom for our community and we look forward to celebrating its unique place in history.”

“The musical performance by the Boston Gay Men’s Chorus will add a dynamic element to the commemorative event. Having the Chorus serve as the anchor for our program will lift everyone’s spirits as we pay tribute to the Mayflower Pilgrims and to the native Wampanoag people who were here before them,” said Dr. Weidner. “We are looking forward to welcoming over 500,000 new visitors who will travel during 2020 to Provincetown for the 400th commemoration.”

For information on events, tickets and sponsorships please visit: www.provincetown400.org

About Provincetown 400
Provincetown 400 was established to guide the town’s commemoration activities in recognition of the 400th anniversary of the arrival of the Mayflower Pilgrims, the signing of the Mayflower Compact, and to also share the story about the native peoples living here long before the Pilgrims landed. The Provincetown 400 Task Force is a committee of the board of the Pilgrim Monument and Provincetown Museum and includes members of the community who have been meeting regularly since early 2018. The Task Force Co-Chairs are Dr. K. David Weidner, Executive Director of the PMPM and Lori Meads, President and CEO, Seamen’s Bank.