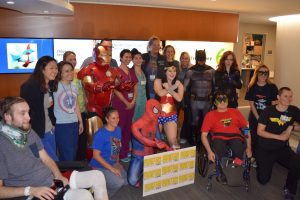 (Boston, MA) – July 31, 2019 – FAN EXPO Boston announced today a new collaboration with Spaulding Rehabilitation Hospital that will provide a portion of the show’s ticket sales on August 6, 2019 to go toward the renowned hospital and rehabilitation facility. FAN EXPO Boston will donate $5 per ticket sold and also give fans the opportunity to make an additional donation.

The three-day comic and pop culture show will take place on August 16 to August 18 at the Boston Convention and Exhibition Center and will feature an exciting line-up of celebrity guests as well as legendary comic creators and cosplayers.

“We have lots of Superheroes at FAN EXPO Boston, but we know the real Superheroes are those caregivers who work tirelessly at Spaulding Rehabilitation Hospital to put their patients on the road to recovery,” said Andrew Moyes, Vice President, FAN EXPO Boston. “We are deeply impressed by the impact that Spaulding has on the community and we are honored to provide support to this remarkable institution.”

“Spaulding began hosting FAN EXPO Boston cosplayers 3 years ago and we are excited to continue this fun tradition that our patients—and staff—look forward to. And, by giving us an opportunity to benefit from a portion of ticket sales, we can support our mission to provide the best rehabilitation care to our patients,” said David Storto, President of Spaulding Rehabilitation Network and Partners Continuing Care.

Spaulding Rehabilitation Hospital will also be featured at FAN EXPO Boston at a “Test Your Strength” booth where hospital therapists will check fans’ strength using a grip tester. Are you strong enough to reach the highest level of strength and be a Thor? Or, are you on the weaker side and your grip is more like Loki? Look for the booth on the show floor on August 16-18.

FAN EXPO Boston celebrity guests include award-winning actor John Travolta; Zachary Levi from the hit DC movie Shazam!; the cast of Boy Meets World, including William Daniels; Peter Capaldi of Doctor Who, in his first east coast appearance; Sean Young and Edward James Olmos of Blade Runner; Stephen Amell of Arrow; Corey Feldman of The Lost Boys, The Goonies and Stand By Me; Sean Astin of The Goonies, Lord of the Rings, and Netflix’s Stranger Things; and Ke Huy Quan of The Goonies and Indiana Jones.

Tickets start at $35. Celebrity photo ops, autograph sessions, workshops, and panel discussions will be available throughout the weekend. There are multiple options for ticket packages including single day pass, deluxe pass, family pass, child pass, premium pass, and VIP package. To learn more about the different packages or to purchase tickets visit www.fanexpoboston.com/en/tickets/admission.