IT’S A WRAP! FAN EXPO BOSTON 2021 THRILLED ATTENDEES WITH THE RETURN OF ALL THINGS CELEBRATING FANDOM

PLANS ARE UNDERWAY FOR A SPECTACULAR FAN EXPO BOSTON 2022 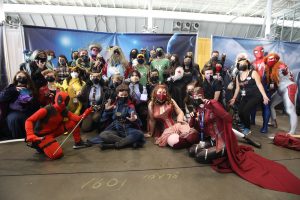 (Boston, MA) – September 16, 2021 – FAN EXPO Boston returned to the Boston Convention and Exhibition Center (BCEC) September 3 – 5, 2021 and is gearing up for a spectacular show in 2022.  Next year’s show, to be held August 12-14, 2022, will have more programming, more attractions and more after-hours events for fans to enjoy.   FAN EXPO Boston 2021 received a great response from fans who saw an exciting lineup of celebrity guests, comic creators and cosplayers who entertained them at the three-day pop culture show.  Especially popular were the fan Q & As, photo ops and autograph sessions with celebrities including: Brendan Fraser of The Mummy and Doom Patrol, Michael Rooker of Guardians of the Galaxy, Christopher Eccleston of Doctor Who, John Barrowman of Arrow and Lana Parilla of Once Upon a Time, Mark Boone, Jr, Ryan Hurst and Ron Perlman of Sons of Anarchy, Katie Sackoff of The Mandalorian.  Other highlights include An Evening with Comic Legend Jim Shooter and 2021 FAN EXPO x Hololive EN North American Tour from Japan’s premier Vtuber agency. See more of FAN EXPO Boston 2021 in this highlight reel:

The show also included a Cosplay Red Carpet, Anime film screenings, Comic Creator Sketch Duels, Gaming competition in the Community Zone, fan meetups, story times for kids and more.  The event, which included public health and safety protocols such as a mask mandate, marked the first public show at the BCEC in more than a year.

“The energy at FAN EXPO Boston 2021 was incredible as we brought together our awesome community to celebrate all things pop culture.  The show demonstrated that the fandoms are uniting once again,” said Andrew Moyes, Vice President of FAN EXPO HQ. “We’re working on plans for next year and looking forward to a supercharged experience for FAN EXPO Boston 2022.”

Cosplay is a centerpiece of FAN EXPO Boston as thousands of fans attend the show wearing costumes of their favorite characters. Creativity abounded during the official cosplay costume competition on Saturday, September 4, when the FAN EXPO Boston Cosplay Craftmanship Cup was held.  The winner, Nick Chanandais of Acushnet, MA, was chosen as the Best in Show with his costume portraying Reinhardt of the video game Overwatch.

FAN EXPO Boston 2021 kicked off the show on September 3rd with an official proclamation from the City of Boston to welcome the show back to Boston.  FAN EXPO Boston also continued its partnership with Spaulding Rehabilitation Hospital, which had a booth at the show featuring its Motion Analysis Lab that uses robotics to help those with mobility injuries. Prior to the show, FAN EXPO Boston Cosplayers visited pediatric patients and staff of Spaulding, the true superheroes, to raise their spirits.