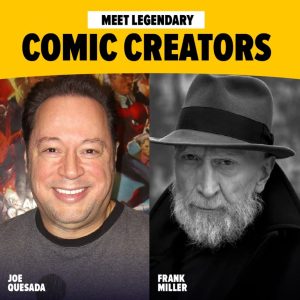 (Boston, MA) – June 23, 2022 – FAN EXPO Boston, the three-day pop culture extravaganza, will feature legendary comic creators Frank Miller and Joe Quesada along with 80+ other comic creators at the Boston Convention and Exhibition Center (BCEC) August 12-14, 2022. Comic fans can look forward to appearances from the likes of legendary creator Frank Miller, best known for his work on 300, Daredevil, and Batman. He is the subject of a documentary American Genius which will be screened at the show that will also include a Meet and Greet with fans. Also appearing is Joe Quesada, Marvel’s former Chief Creative Officer; C.B. Cebluski, – Editor-in-Chief for Marvel Comics; Kevin Smith, comic book writer and filmmaker; among others.

Special event opportunities for fans to engage directly with top comic creators include:

A full list of comic book creators that will be in attendance can be found here.

The show also features Artist Alley where pencillers, inkers and writers will be working on their craft and interacting with fans. Artist Alley is where you will meet comics’ rising stars, the artists working the front lines of the comic industry, and where you will find limited edition prints, original art, graphic novels and sketches.

In addition, Fan Expo Boston 2022 features a number of celebrity events including The Four Hobbits: The Unexpected Reunion of Lord of the Rings stars Billy Boyd (Pippin Took), Dominic Monaghan (Merry Brandybuck), Sean Astin (Samwise Gamgee) and Elijah Wood (Frodo Baggins.) Dr. Who favorites Catherine Tate and David Tennant and Nathan Fillion of Firefly will also be in attendance, along with actors Kevin Smith and Jason Mewes (Jay & Silent Bob) of Clerks who will be on hand for a special fan event.