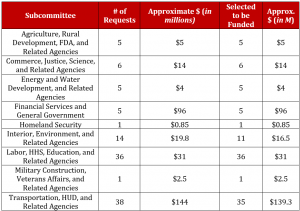 Senator Collins, the sole Republican Senator from New England, requested almost $320 million for projects in the state of Maine. The Senator’s requests focused on healthcare, transit, and infrastructure projects, making up more than half of the total requests between the THUD and Labor, HHS, and Education titles. All but six of her requests were approved, securing more than $300 million for Maine, and joining with her colleague Senator King on numerous high profile MaineDOT projects. More than $10 million will be invested in Maine’s airports, with an additional $100 million for bridge and road repairs under the THUD title. Senator Collins focused less on nonprofits than her colleague Senator King, but instead secured nearly $30 million for Maine colleges and universities and municipal community health programs, such as $5 million for the University of New England’s Institute for Interprofessional Education and Practice under the Labor, HHS title.

Under the Financial Services title, Senator Collins also secured nearly $100 million for updates to the Coburn Gore land port of entry to help meet modern security stands and to properly address safety threats posed by drug trafficking. This request was based on 2018 GSA feasibility study. Numerous mental health service organizations and medical research centers are now poised for funding in Maine thanks to the substantial quantity of smaller-valued requests made by Senator Collins under the Labor, HHS, and Education title. 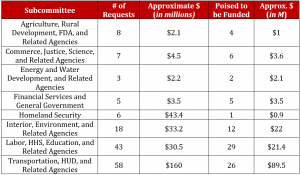 Senator King requested more than $280 million for 148 projects in his state. 85 of these requests are poised to be funded, totaling nearly $200 million for Maine projects, with a specific focus on joint requests made to MaineDOT improvements. Senator King partnered on many of these statewide requests with Senator Collins. Senator King focused on requests that ranged from $250,000 to $2 million, with an emphasis on supporting municipal projects that increased public safety and upgraded public services, such as homeless shelters and rehabilitation of town and city buildings. Numerous Maine nonprofit organizations are also poised to benefit from Senator King’s requests, such as LearningWorks’ teacher training and curriculum development program, Best Buddies Inc. providing inclusionary services for intellectually and developmentally disabled students in Maine, and Coastal Enterprises, Inc. funding an incubator for food system businesses.

Representative Pingree requested and is poised to secure $6.5 million for ten projects. Healthcare upgrades, substance abuse programs, and social services all received significant attention in the Congresswoman’s requests. These upgrades and new construction projects included almost $1.5 million for rural medical services, such as an investment for a new Child Oral Health Center, and smaller requests for an Augusta municipal substance abuse program and a new shelter to serve the homeless population in urban settings. Recreational trail improvements and historic building preservation and renovation were also included in Representative Pingree’s submitted funding requests.

Representative Golden focused heavily on innovation and training across ten requests funded at a proposed $6.9 million. Eight of these requests are poised for funding, at a sum of $5.35 million. These requests included $2 million for new ME Community College System Training Programs in Advanced Manufacturing and Logging Operations. Another $1 million was set aside for an anaerobic digester construction project in Madison. A historic theatre run by a local community nonprofit is set to receive $350,000 for rehabilitation of their facility and another $500,000 will be used for a new Rumford fire and emergency services facilities.