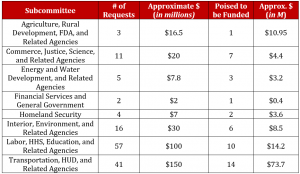 The Senators from Massachusetts collaborated to request more than $300 million in appropriations, with a focus on community development under the THUD title and funding for nonprofit projects, including numerous healthcare entities, under the Labor, HHS, Education, and Related Agencies title. Nearly $120 million across 42 projects is slated for Massachusetts by the relevant subcommittees. The Town of Princeton received nearly $11 million for improvements to and rehabilitation of the emergency service headquarters.

Under the THUD title, five projects were approved with a focus on conservation and greenspace for communities, such as $2 million for The Trustees of Reservations to construct a climate resilient park in East Boston and $16.6 million for proposed conservation improvements to be carried out by the Emerald Necklace Conservancy. Municipality and regional transit authority projects were also successful under the THUD title for the MA Senators, with the Town of Saugus, Town of Charlemont, City of New Bedford, and the Greater Attleboro Regional Transit Authority all being approved for project funding.

The Chair of House Ways and Means, Congressman Neal, requested nearly $10 million for his ten community projects. These ten were all submitted under their relevant titles and are poised to bring $7.94 million in federal funds to MA. Chair Neal’s focus was largely on community revitalization and educational services. These investments include $1 million for Greylock Glen’s new Outdoor Center for environmental education, a third of his original request for the project, and $450,000 for stabilization and modernization of a local youth camp. Healthcare was also a hot topic for Chair Neal, with $200,000 going to a Franklin County opioid task force and $350,000 for Berkshire Community College’s Nursing Simulation facility for required upgrades. Additionally, more than $1.5 million is poised to upgrade two municipal water and wastewater treatment facilities.

Representative McGovern requested $10.5 million for his ten projects and is poised to secure $10.2 million for nine of these, with a particular emphasis on local nonprofits and addressing food insecurity. These projects include $975,000 for outreach to communities of color by local healthcare nonprofits, $430,000 for a new Veterans, Inc. substance abuse facility, $2.2 million for Worcester Regional Food Hub to construct a new centralized HQ at Union Station, and $110,000 for a local food insecurity nonprofit to purchase a mobile delivery vehicle. Diversity in innovation and education also received attention from the Congressman’s project requests, with $1 million to expand UMass Amherst’s Robotics Program, $978,000 for Quinsigamond Community College’s new diverse workforce development program, and over $1 million for LaunchSpace, Inc.’s new facility for workforce training.

Representative Trahan focused her ten project requests, totaling over $10 million, on community-based programs for outreach and social services. Securing $8.4 million for these ten projects, including $1.65 million for a Middlesex County new behavioral health restoration center pilot program and $2 million for expansion of services at the Greater Lawrence Family Health Center, the Congresswoman emphasized mental health services. Resiliency and recreation were also priorities, with $750,000 for design and construction of a new Stow multi-use pedestrian trail, $352,000 for Merrimack River resiliency and pollution-reduction program, and $1 million reinvestment in a Lowell baseball park – a third of Representative Trahan’s original request for the project. UTEC, Inc. is poised to receive $500,000 for an at-risk youth program, focusing on violence prevention.

The first-year Congressman requested $16.2 million for his ten projects with a significant focus on local transportation and infrastructure improvements. Eight of these projects were funded at a total of $13.75 million, including almost $5 million for PFAS removal at two separate municipal water treatment facilities. An additional $3 million will go to two water system expansion projects for municipal services operating over capacity. Bristol Community College is poised to received $2 million for a National Offshore Wind Institute, submitted jointly with Congressman Keating. $1.5 million is slated to invest in Fall River’s urban renewal plan by expanding parking and stormwater drainage.

Assistant Speaker, Representative Clark requested $11.4 million for her ten requests, and secured $7.3 million for seven of these projects under their respective titles. The largest of these projects was $4 million for MassDOT to perform a connectivity project for environmental justice and low-income communities at the Wonderland Multimodal Connector. Another $3.36 million will go to Malden for lead removal in the public water system, as Representative Clark’s requests focused on improvement of public services and increasing resiliency. The Edward M. Kennedy Community Health Center is poised to receive $1 million for a new interpreter training program.

Representative Pressley secured $8.8 million for all ten of her community project funding requests, slightly more than what was requested. Education was a main focus of the Congresswoman’s requests, with $1.275 million heading to Randolph for two initiatives that will increase cultural and digital literacy to promote equity, and expansion of healthcare services through school-based programs at Randolph High School. Another $1 million is poised to fund Boston’s services for low-income students. Employment initiatives and training, flood resiliency, bike lanes, and municipal facilities to promote the arts were all areas of focus for Representative Pressley.

Representative Lynch requested $12.55 million for his ten community funding projects and was able to secure $8.4 million for six of these projects. These six approved requests achieve a diverse range of objectives, such as $1 million for a new recreation facility at the Dorchester’s Boys & Girls Club, $1.75 million for pre-development of a new Boston Housing Authority Opportunity Center, and $1 million for the New England Center and Home for Veterans to upgrade and modify their facility. Other areas of emphasis included resiliency for parks in Boston, pump station replacement, and residential substance abuse programs.

Representative Keating requested $14.3 million for his ten community projects and secured $6.85 million for eight of these projects. A significant focus on community services was evident through Representative Keating’s requests, specifically with healthcare improvements and environmental education and recreation receiving the most attention and funding. For example, $2 million will go to the Greater New Bedford Community Health Center for facility renovations, $1.5 million to Cape Cod Healthcare for improved telehealth services, and more than $1 million for two projects at St. Luke’s Hospital and the Outer Cape Health Service for substance abuse recover programs and new facility and equipment improvements.