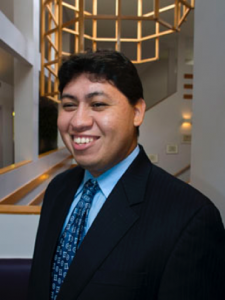 (Boston, MA) – August 4, 2020 – National Braille Press (NBP) announced today that Joe Quintanilla, Vice President of Development and Major Gifts at NBP, gave the keynote address at Massachusetts Commission for the Blind’s (MCB) Internship Closing Ceremony. His remarks were inspirational, “some people may see their blindness as a weakness, but they should show them it is a source of strength.”

Quintanilla, speaking to the interns at a virtual ceremony on Tuesday, August 4, also told them “There are times in our lives that people will slam the door on us because we are blind, and it will be painful. You must knock on that door until someone opens it, believes in you and gives you a chance. When they give you a chance you must seize the opportunity and give it all you have. Let that person know you are worthy of this opportunity and appreciate the chance.”

Throughout his career, Joe has raised more than $13 million for the blind community.  Joe is one of six kids, two of which are legally blind.  His first experience with MCB was at age 7 when he learned how to use his cane.

While helping him get used to his cane, the MCB Counselor asked Joe “what do you want to do when you grow up? And Joe responded “…I want to be an outfielder for the Red Sox.” The Counselor explained that if he wanted to play for the Red Sox then he would have to learn how to get to Fenway Park on his own.

Before he knew it, Joe was able to get from home taking the MBTA to Gate A at Fenway Park using his cane at age 7 ½. Joe added, “the one thing that has meant a lot in my life are the people that have believed in me.”

“Joe Q exemplifies resilience and career success,” said MCB Commissioner David D’Arcangelo. “Working together, our interns, employer partners and team at MCB are proving that being blind or visually impaired is not a barrier to employment.”

MCB has held 15 Internship Closing Ceremonies, which are typically held at the Massachusetts State House, However, this is not a typical year.  Due to COVID-19 the event was held virtually for the first time.

This year, MCB honored 43 interns at the ceremony who now join ~700 other MCB interns since the program’s inception 17 years ago.  This program was created to help form an employment pipeline for people who are blind and visually impaired.

“Our 2020 interns entered the workforce courageously during a time of change due to COVID-19, but they were ready for the challenges ahead. As individuals who are blind and visually impaired, they already know what it takes to problem solve, adapt, and persevere. Many were asked to work remotely and adjust to new technology.  They did it all because they are determined to find career success.  Our employer partners believed in our interns and opened their doors even as they too encountered their own workplace challenges,” added Commissioner D’Arcangelo.

During the closing ceremony, MCB honored AllWays Health Partners as the Employer of the Year Award for hiring two individuals who are blind and visually impaired during the pandemic.  The Reach for the Stars essay contest winners were also announced. The event included remarks from Secretary of Health and Human Services Marylou Sudders.

National Braille Press is a non-profit braille publisher and producer of braille products. NBP creates products and programs to support braille literacy in the blind community and to provide access to information that empower blind people to actively engage in work, family, and community. For more information visit www.nbp.org