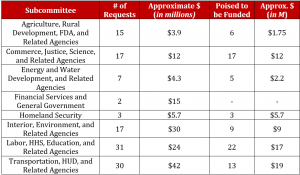 Senator Shaheen was the sole New Hampshire Senator submitting congressional directed spending requests at a total of over $150 million for 122 proposed projects in The Granite State. Comparatively less than other New England Senate colleagues, Senator Shaheen’s largest request was for a $9.4 million public-private partnership development project for a cargo facility at Manchester-Boston Regional Airport. This request is poised for funding under the THUD title.

Senator Hassan did not submit any requests for funding.

Representative Kuster requested and secured $8.2 million for her ten community project funding requests, with a significant focus on pedestrian safety and recreational trail expansion and improvement. This includes a $5 million investment in conservation improvements at the Silvio O. Conte National Fish & Wildlife Refuge and over $1.2 million for three projects that improve state recreation trails and provide modernized ADA services for municipal parks. Other focuses include watermain relocation and technical assistance for North Country Council’s “Housing Ready” program. An emphasis was also placed on specialized healthcare services, with $500,000 going to a local nonprofit that provides substance abuse residential facilities for mothers and children, and $380,000 for suicide prevention initiatives.

Representative Pappas requested $8.3 million for his ten community projects and is poised to bring home $6.3 million for seven of these requests. The Congressman focused heavily on rural development and community services for the far-reaching corners of his district, including $2.2 million for rural broadband network expansion. An additional $751,000 was secured for radio system upgrades for the Strafford County Sherriff’s Department and $1.5 million for municipal office and emergency operations center construction. Emergency services received a particular emphasis in requests with $300,000 being devoted to Manchester PD for gunshot recognition technology, $120,000 for a Somerset fire training tower, and $750,000 for the YWCA of NH to provide trauma-informed law enforcement training for local departments.