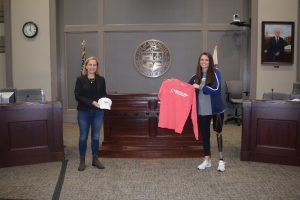 Noelle Lambert was honored to meet with Mayor Joyce Craig, Mayor of Manchester, NH, at City Hall on Oct. 23, to discuss her work with The Born to Run Foundation that provides specialized athletic artificial limbs to young amputees. As a Manchester resident, Noelle was eager to hear about the Mayor’s love of running and they plan to meet soon to do a run together.  Also, the Mayor congratulated Noelle on being named as one of the Ten “Women of Worth” by L’Oreal Paris which donated $10,000 to the foundation.  L’Oreal Paris is also going to name a National Honoree from the Ten “Women of Worth” and the one who gets the most online votes, will receive $25,000 for their organization. Voting is going on right now and continues through November 27th.  You may vote once in a 24-hour period at www.womenofworth.com

The Born to Run Foundation was founded by Noelle, 23, who lost her leg in a moped accident on Martha’s Vineyard in 2016.  She is a former Division 1 college athlete who played lacrosse at the UMass Lowell and established the foundation to help amputees obtain specialized athletic prosthetic devices so that they can live fulfilling lives.  Also, Noelle is a member of the U.S. Paralympic team and is currently training for the 2021 Paralympics in Tokyo in the 100-meter race in Track and Field. On November 13, 2019, Noelle set a new U.S. record at the World Paralympic Championship games in Dubai running the 100-meter in 16.31 seconds.