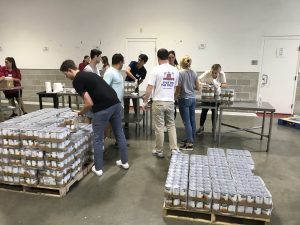 Each year O’Neill and Associates’ interns partake in a summer volunteer project, with the goal of helping members of our community. On Monday, July 16, the summer intern team participated in a volunteer trip to the Greater Boston Food Bank. We spent the day cleaning and compiling hundreds of packages of food, ensuring that the warehouse would remain clean and organized. Along with two other volunteer groups, the OA team helped to preserve 29,367 pounds of food, which is equivalent to 24,473 meals for those served by the GBFB!

In the week leading up to our volunteer trip, we ran an in-office food drive. After generous donations from staff, we successfully collected multiple boxes of non-perishable foodstuffs to be donated to the food bank.

The Greater Boston Food Bank is located in the South End of Boston and has been serving the Eastern Massachusetts community since 1974. In the past three 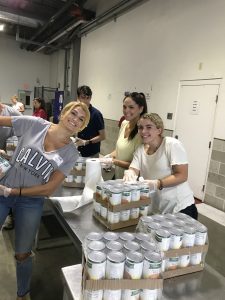 years, the food bank has distributed more than 600 million pounds of food annually, feeding more than 142,000 members of the community each month. As the largest hunger-relief organization in New England, the Greater Boston Food Bank has a goal of providing one meal a day to every hungry person in the 190 cities and towns the organization assists. 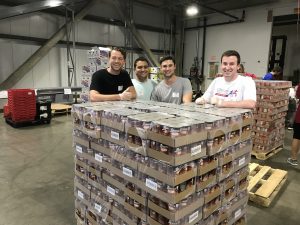 In addition to helping with the upkeep of the warehouse, we learned about the basic operations of the food bank, as well its importance to the community.72 percent of the households that the food bank distributes to need regular use of a food pantry in order to have enough to eat; a staggering 1 out of 10 of our neighbors in Eastern Massachusetts are affected by hunger.

O’Neill and Associates is committed to supporting local organizations like the Greater Boston Food Bank, which play such vital roles in aiding community members in need. It was a great experience to be able to give back with my fellow summer interns.