Presidential Campaigns Are a Testing Ground for Digital Strategies

A recent Los Angeles Times article, “Trump’s big, early lead in Facebook ads deeply worries Democratic strategists” describes the early and “unprecedented success” that the Trump campaign has made with Facebook advertising, which we all know now was vital to the success of his campaign in 2016. Political campaigns will experiment with new communications methods and platforms in their rush to persuade voters and highly-target distinctive audiences that could make a difference in a tight race. Time is short in campaign life, so they move quickly to adapt and learn from mistakes. Because of this, campaigns are great libraries of innovation especially in the area of audience identification and engagement. Today marketers, public relations professionals and issue advocates need to have a similar understanding of the impact a thoroughly-thought out and well-executed Facebook ad campaign can have on the success of a communications effort. In this blog post we take a look at why Facebook is such an attractive advertising platform for your digital arsenal. 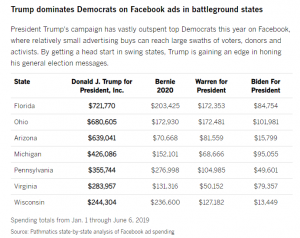 Facebook is one of the oldest social media platforms. It has a larger active user base compared to Instagram: Facebook has 2.07 billion monthly active users. Twitter has adequate reach, but is not nearly as large as Facebook, with 232 million active users. It is also important to remember that Facebook and Instagram are partners and advertisements can be cross-posted onto each platform for maximum exposure.

Facebook also has significantly more options in regard to targeting — targeting options are detailed as well as customizable. A Pew Research study also found that Facebook is the most popular among young adults within the 18-to-29 age group. Seventy-nine percent of internet users between 30 and 49 use Facebook. These statistics prove that Facebook reaches users of all age groups. 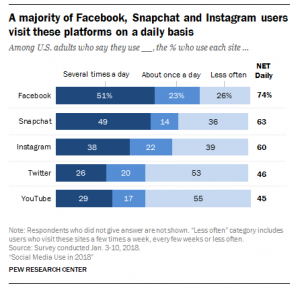 Facebook is an excellent platform to use for a successful campaign, but before execution, a thorough analysis of goals and expectations must be assessed in order to determine the right platform suitable.

That being said, as Facebook rolls out new regulatory standards for political advertising, it will be interesting to see what types of ads sink or swim in the coming months. Facebook has already taken heat for mistakenly removing Elizabeth Warren’s Facebook ad calling for the breaking up of tech companies (Facebook restored them quickly afterward).  Our team has previously discussed the pressure that Facebook is facing to crack down on “fake news” and foreign political advertising (OA on Air Episode 40) so in the coming months there seem to be many issues coming to a boil and it’s anyone’s guess how they will turn out. We will be watching the platform closely as there undoubtedly will be some new learning moments for communicators.