Reflecting on the 20th Anniversary of 9/11

O’Neill and Associates Vice Chairman John Cahill provides his thoughts and reflections on the tragic events of September 11, 2001. Mr. Cahill participated in the Massachusetts Port Authority effort to gain federal approval of its $143 million reimbursement from the Transportation Security Administration based upon its first in the nation baggage security system immediately following the attacks of September 11. 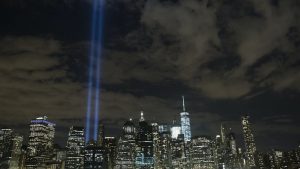 There are distinct moments that change the course of history. Some are uniquely American, and others send out waves that alter the tides of the world. These moments live in our collective consciousness, set in stone and memorialized by where we were, who was by our side, and what we were doing when we first heard the news.

It was early Tuesday morning when I arrived at the Beacon Street office of O’Neill and Associates. I planned to be in Montreal for an annual International conference of airports with my peers and colleagues from the Massachusetts Port Authority, the owner and operator of Logan International Airport just over 2 miles from my office. However, the busy return of the House and Senate from their August recess in the first weeks of September 2001 kept me in Boston for a day that remains ingrained in the minds of millions of Americans. Then calls began flooding in.

Reflecting on the morning of September 11th, the loss of 2,977 lives, the days, weeks, and months that followed, and the permanent alteration of how we view the world in which we exist, I remember the silent skies and attempts to fathom what may come next. After twenty years have passed, the initial moments still play in my mind and subsequently shaped the actions taken in the challenging months that concluded 2001.

In due course, it became clear that all voices had to be recognized while shaping the policies that would prove to define our new millennium and to answer questions we never thought would have to be asked. How do we equip ourselves for a future written in the wake of this tremendous tragedy? We got to work. It was almost October by the time that I was able to get back to DC. And, as I sat across the table from the Former Senator from Massachusetts, John Kerry, he reiterated the importance of the task at hand – this was not going to be easy. It would require thoughtful consideration of every variable.

My role quickly became ensuring that the voice of MassPort, and in turn that of all port authorities, was heard and understood in the formation of new guidelines, new measures, and advances in the future of airport security and national security. Our close relationships within the United States Department of Transportation proved helpful as we forged a commitment to provide MassPort with enough federal aid to procure state-of-the-art security equipment. This effort created a model for ports across the country, even a year a half before the Department of Homeland Security came into existence. By June 2002, Logan International Airport was the first in the United States to implement an in-line bag screening process fully approved by the TSA.

This tragedy brought America together to listen and process the stories of victims and survivors and understand the path forward. It brought policymakers together to find common ground, ensuring that an attack of this magnitude would never happen again.

To commemorate this important anniversary, I was honored to participate in a conversation with Tom Kinton, the Massachusetts Port Authority Director of Aviation, on September 11th and CEO from 2006 to 2011. It was powerful to reflect with my friend on our conversations and remember the historical aftermath of that September day. To hear more of these stories and learn about the actions taken following the attacks on September 11th, watch the O’Neill and Associates podcast, OA on Air—Federal Insight, on YouTube here or listen through Apple or Soundcloud.