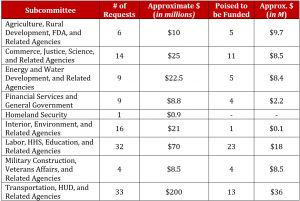 Senator Reed requested a total of around $350 million for 104 projects in Rhode Island and is poised to bring home more than $80 million with a focus on addressing the condition of Rhode Island’s bridges and roads. Recreational projects, such as the creation of new bike paths, pedestrian bridges, and recreation trails were also a main focus of Senator Reed’s requests, bringing in more than $10 million. Under the THUD title, the RI Airport Corporation is slated to receive $6.6 million for cargo and corporate aviation improvements.

The Ocean State is also expected to receive millions for resiliency and efficiency improvements for state transit authorities and public schools, as well as $2.5 million for resiliency and climate-related research to be conducted by the University of Rhode Island. Community development and revitalization was also a focus of Senator Reed, with $2 million heading to the City of Central Falls for a new community center, $5 million to the City of Warwick to build an outdoor, year-round public plaza, and $3 million for the City of Pawtucket to build a public plaza with modernized utilities.

Senator Whitehouse requested less funding than his senior Senate colleague, with a total of approximately $290 million. However, Senator Whitehouse secured more funding overall with more than $130 million across 55 projects. The main focus of the Senator’s requests was the THUD title, with community-based nonprofits, state transit authorities, and municipalities receiving a lion’s share of attention.  The RIDOT and RI Turnpike and Bridge Authority received $38.4 million and $17 million respectively to be used on three separate bridge repair and preservation projects.

The RI Department of Labor and Training was approved for $15 million under the Labor, HHS, Education and Related Agencies title for workforce training and skill-building for up to 10,000 individuals through a partnership with about 50 RI employers. A host of local nonprofits also received funds to support youth and workforce services as well as a robust investment in healthcare and medical facilities. For example, the RI HHS Executive Office secured $25.4 million under this title to construct a new healthcare facility.

Representative Cicilline requested and secured over $9.5 million for his ten project requests, focusing on construction and renovation of community health and recreation centers that enhance services and accessibility while prioritizing equity. Coastal resiliency also received attention, with $960,000 to Middletown for mitigation purposes to protect sidewalks along coastal roads and byways. $412,000 will be devoted to the nonprofit Family Service of RI, helping to create police partnerships for trauma-informed, non-violent intervention training, and $350,000 will invest in a partnership between East Providence and Roger Williams University to develop diverse workforce talent with certificate programs. The other projects invest more than $7 million for seven separate community center improvement and construction projects to be carried out by nonprofits and municipalities.

Representative Langevin requested and secured $7.91 million across his ten community projects. More than $1 million will invest in two municipal playground projects that aim to create new equipment and increase ADA compliance. $775,000 is poised to fund the restoration of a historic lighthouse, with a focus on coastal resiliency. Higher education institutions in RI were emphasized by the Congressman’s requests, with Community Colleges of RI received $1.06 million to establish a new technology system to promote student engagement and $1 million for the University of Rhode Island to conduct pollution and particulate research. Rhode Island College is poised to receive $500,000 to create three new certificate programs in data science, cyber security, and computer science.