The Born to Run Foundation Congratulates Noelle Lambert for Setting a New U.S. Women’s Record at Paralympic Games in Tokyo 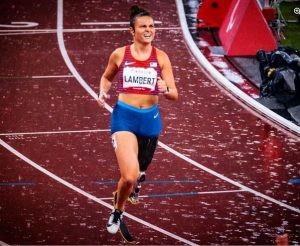 (Photo of Noelle Lambert on Track at Paralympic Finals in Tokyo)

(Boston, MA) – September 15, 2021 – The Born to Run Foundation congratulates Noelle Lambert, the non-profit organization’s founder, for setting a new U.S. Women’s record in the 100-meter in Track & Field in the Tokyo Paralympics, held recently in Japan. Lambert’s record-setting time of 15.97 seconds beat the previous American record that she held.  Lambert competed in the T63 Division (above the knee amputee) and it was her first Paralympic appearance.  She came in sixth place in the final competition.

“I want to thank everyone for their support during my participation at the Tokyo Paralympics,” said Noelle Lambert, founder of The Born to Run Foundation and Paralympian. “Being in the Paralympics meant so much to me as the competition showed the world that disabled athletes are like all athletes – motivated, competitive, and proud to represent our communities. Getting to the finals was a goal of mine, and now that I have achieved that, I am even more motivated to help other amputees through the work of the Foundation. And I will continue to compete, looking ahead to the next Paralympic Games!”

In 2016, when Lambert lost her left leg, she was a Division 1 college athlete who played women’s lacrosse at the University of Massachusetts (UMass) Lowell. She was determined to continue competing and after rehabilitation and training, she returned to the team and scored a goal in her first game after her accident.  During Lambert’s physical therapy, she received support from several foundations that help people with limb differences.  Inspired to also give back to the amputee community, she established The Born to Run Foundation to help young amputees obtain specialized athletic prosthetic devices so that they can live fulfilling lives. To date, the Foundation has made 14 prosthesis donations to amputees across the U.S.

After graduating from college in 2019, Noelle Lambert made the decision to train for the Paralympics in Track & Field with the encouragement of other Paralympic athletes, including Femita Ayanbeku of Quincy, MA who has also competed in 100-meter in the T64 Division (below the knee amputee) in the Tokyo Paralympics on Team USA. She competed in the Paralympics Games in Rio de Janeiro in 2016. Ayanbeku is also a board member of The Born to Run Foundation.