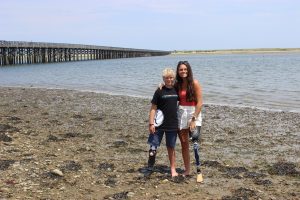 The Born To Run Foundation has helped a 12-old amputee get back in the water again.  Noelle Lambert, founder of The Born to Run Foundation, officially presented an artificial water leg to Jack Berry of Missoula, Montana at a ceremony yesterday on the shores of Duxbury Bay, Mass.  This is the foundation’s 9th prosthesis donation.

“Getting this water leg from The Born To Run Foundation is super exciting because I am a really active kid and I love to play in the water,” said Jack Berry at the event in Duxbury. He added that his favorite water sport is surfing. “I love to surf, and this will allow me to do that with more ease.”

In 2018, Jack was diagnosed with osteosarcoma which resulted in the amputation of his right leg. Jack spent months at the Jimmy Fund Clinic at Dana Farber Cancer Institute in Boston receiving treatment for the osteosarcoma. After he went back to Montana, he became active again with the use of his new artificial leg, but he needed a special water prosthesis to go swimming and participate in other water sports. The foundation paid for Jack’s artificial water leg which was made by A Step Ahead Prosthetics in Burlington, MA.  Jack traveled to A Step Ahead last week for the final fitting for the new water leg. The donation ceremony took place in Duxbury where Jack was visiting family after receiving the artificial limb.

“Jack’s story is incredibly inspiring, and the foundation was honored to have the opportunity to provide him with a water prosthesis,” said Noelle. “Now Jack will be able to get back into the water do the things he loves like swimming and surfing.”

The foundation was founded by Noelle Lambert, 23 of Manchester, NH, who lost her leg in a moped accident on Martha’s Vineyard in 2016.  She is a former Division 1 college athlete who played lacrosse at the UMass Lowell and established the foundation to help young amputees obtain specialized athletic prosthetic devices so that they can live fulfilling lives.  She is now a member of the U.S. Paralympic team and is currently training for the 2021 Paralympics in Tokyo in the 100-meter race in Track and Field. On November 13, 2019, Noelle set a new U.S. record at the World Paralympic Championship games in Dubai running the 100-meter in 16.31 seconds.