The Born To Run Foundation Donates Swimming Prosthesis to 17-Year-Old from Knoxville, TN 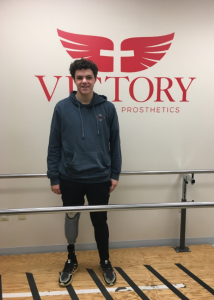 The Born To Run Foundation donated a swimming prosthesis to 17-year-old Marshall Harkrider of Knoxville, Tennessee, a below the knee amputee. This is the foundation’s eighth prosthesis donation. Marshall is a junior at West High School in Knoxville.

“I am so grateful to have the opportunity to be given a swimming foot from Noelle and The Born To Run Foundation,” said Marshall Harkrider. “I am looking forward to being able to navigate the beach with ease and swim in the ocean.”

In January 2019, at the age of 15, Marshall was a passenger in an ATV that turned over on his legs. He endured nine surgeries due to the accident which led to the below the keen amputation on his right foot. Prior to his accident he was an elite soccer player and athlete. With his new swimming foot Marshall will now be able to hike, wade, fish and swim and the pool or beach without having to use crutches or a wheelchair to get in and out of the water. He is an avid golfer and soccer player and was able to return to the soccer field in January 2020, just seven months after his last surgery.

“Marshall and I are so grateful for this amazing gift, said Ashley Harkrider, Marshall’s mother. “It has inspired him to be even more active and has given him the ability to look forward to just being a regular kid without worry at the pool, on the river or at the beach.”

The foundation was founded by Noelle Lambert, 23 of Manchester, NH, who lost her leg in a moped accident on Martha’s Vineyard in 2016.  She is a former Division 1 college athlete who played lacrosse at the UMass Lowell and established the foundation to help young amputees obtain specialized athletic prosthetic devices so that they can live fulfilling lives.  She is now a member of the U.S. Paralympic team and is currently training for the 2021 Paralympics in Tokyo in the 100-meter race in Track and Field. On November 13, 2019, Noelle set a new U.S. record at the World Paralympic Championship games in Dubai running the 100-meter in 16.31 seconds.

Noelle met Marshall at a running clinic in Central Park in New York City and she encouraged him to apply to the foundation for an artificial swimming foot.

“Marshall’s story is captivating and the foundation was more than happy to have the opportunity to provide him with a swimming foot,” said Noelle Lambert, Founder of The Born To Run Foundation. “Now Marshall will soon be able to swim and go to the beach with ease.”

Noelle was planning on presenting Marshall’s swimming prosthesis to him in person, however the coronavirus crisis changed their plans. Instead, they had a virtual presentation. See a video chat with Noelle and Marshall discussing the donation here: https://youtu.be/H_CxL4_ZGzU