Spaulding Rehabilitation Hospital Was the Site of the Donation Presentation 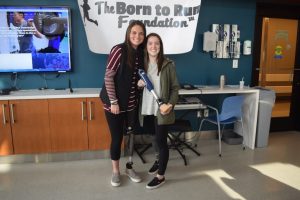 (From left to right: Noelle Lambert, Emma Graham, taken at the Pediatric Unit at Spaulding Rehabilitation Hospital in Charlestown, MA, courtesy of The Born To Run Foundation)

(Boston, MA) March 21, 2019 – The Born to Run Foundation today made its second prosthesis donation at an event at Spaulding Rehabilitation Hospital in Charlestown, Mass.  Noelle Lambert, 22 of Manchester, New Hampshire, established the foundation after she lost her left leg in a moped accident on Martha’s Vineyard in 2016.  Lambert presented a waterproof prosthetic to Emma Graham, 24, also of Manchester, New Hampshire.  Graham’s right leg was amputated above the knee after suffering a stroke when she was a college student at the University of New Hampshire.  When Lambert was recovering from losing her leg, she spent time at Spaulding Rehabilitation Hospital, where Graham also volunteers with the pediatric unit.

“Even though my accident does not define me, it changed me for the better,” said Noelle Lambert. “Working on the foundation and being able to provide special prostheses to young people who have lost limbs has meant everything to me. Now Emma will soon be able to swim in a pool and go to the beach with her new waterproof prosthetic.

At the event, held at Spaulding’s pediatric unit where Emma volunteers, she said that she is thankful for the foundation’s donation of a new waterproof prosthetic so that she can go to the beach this summer and be able to walk into the water.  “I’m so excited that you are able to be the one to give me a water leg so that I can get back to the beach. All I wanted when I was recovering was to be on the beach and go in the water,” said Graham. She also said that Noelle’s support was important to her as they “motivated each other through the hardest times of our lives.”

Dr. David Crandell, Medical Director of the Amputee Program at Spaulding, said that Noelle and Emma’s relationship was special as it showed the importance of peer visitation and support among amputees. Dr. Crandell has worked with both Noelle and Emma at Spaulding.

Lambert is a Division 1 college athlete who plays lacrosse at the University of Massachusetts Lowell and created The Born to Run Foundation to help young amputees obtain specialized prosthetic devices so that they can live fulfilling lives.  Graham’s waterproof prosthesis was made by Next Step Bionics & Prosthetics of Manchester, NH and Newton, MA. Also attending today’s event were Jason Lalla and Andrew Graham, certified prosthetists at Next Step who worked with both Noelle and Emma.

The Born to Run Foundation was established to help young amputees obtain specialized prosthetic devices so that they can live fulfilling lives. Founder Noelle Lambert of Manchester, New Hampshire, created the foundation after she lost a leg in a moped accident in 2016.  As an athlete herself in Division 1 college lacrosse at the University of Massachusetts Lowell, Noelle wanted to ensure that young amputees who cannot afford costly athletic prosthetics have the opportunity to have an active lifestyle.