The Born to Run Foundation Makes its 11th Prosthesis Donation 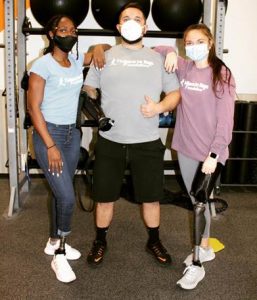 (Boston, MA) – December 18, 2020 – The Born To Run Foundation announced today it has made its 11th prosthesis donation to Kevin Herbert, 32, of Marlton, NJ. Noelle Lambert, founder of The Born To Run Foundation and foundation board member and amputee Femita Ayenbaku, officially presented Kevin with his new prosthetic arm at his gym, the Edge Fitness Center in Delran, NJ, so that he can efficiently carry out all of his gym workouts and sporting adventures.

“Being blessed by receiving this workout arm through Born to Run Foundation creates a brand new dynamic to working out,” said Kevin Herbert. “For me, it’s not just about the results; it’s also about the journey and this creates a whole new one for me!”

Kevin was born without a portion of his right arm.  From early childhood to about 23, Kevin played ice hockey. Today, he works out regularly and is a big advocate for adaptive athletes. Currently he is an amputee peer-to-peer visitor and a clinical services liaison for All Care Orthotics and Prosthetics.

“Kevin’s story is inspiring, and the Foundation was honored to have the opportunity to provide him with a prosthetic arm to continue his active lifestyle,” said Noelle. “Now Kevin will be able to be more efficient in the gym.”

Recently, Noelle was named as a 2020 L’Oreal Paris’ Women of Worth honoree where she was chosen from thousands of nominations for the impact she and The Born to Run Foundation have made.  This donation was made possible by L’Oreal Paris.

The Born to Run Foundation made its first donation in December 2018, two years after founder Noelle Lambert, 23 of Manchester, NH, lost her left leg in a moped accident on Martha’s Vineyard.  She is a former Division 1 college athlete who played lacrosse at the UMass Lowell and established the foundation to help amputees obtain specialized athletic prosthetic devices so that they can live fulfilling lives. Noelle is a member of the U.S. Paralympic team and is currently training for the 2021 Paralympics in Tokyo in the 100-meter race in Track and Field. On November 13, 2019, Noelle set a new U.S. record at the World Paralympic Championship games in Dubai running the 100-meter in 16.31 seconds.