The Born to Run Foundation Makes its 12th Prosthesis Donation

The Born to Run Foundation Makes its 12th Prosthesis Donation 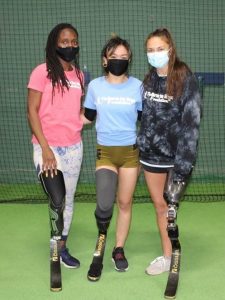 “My running blade serves as a reminder for me to keep on pushing. I had nearly lost both my feet in my accident and now, almost a year later, I have started running and training despite people’s expectations,” said Amelia. “Resources are quite limited in the amputee world so Noelle and Femita were some of the first amputees I have met. Their confidence, care and support were contagious from the second I met them. They are truly empowering and inspiring individuals. I am thankful every time I put on my blade and I hope one day I will be able to pay it forward.”

Amelia is a below the knee amputee. She lost her right foot in a car accident in December 2019 when her car hit a patch of ice while driving home for the holidays. Amelia miraculously survived the car wreck as her car was impaled by a guardrail and landed on its nose against an overpass. She managed to pull herself out of the wreck even with the severe damage to her lower extremities. Three days after her operation Amelia was able to start physical therapy and completed all her rehabilitation goals in just two days. Amelia is a sophomore studying pre-med at Eastern Maine Community College.

“We are incredibly honored to have the opportunity to provide Amelia with a prosthetic leg so she can once again live an active life,” said Noelle. “Now Amelia will be able to run and train while also becoming part of the Born To Run Foundation family that continues to grow.”

Recently, Noelle was named as a 2020 L’Oreal Paris’ Women of Worth honoree where she was chosen from thousands of nominations for the impact she and The Born to Run Foundation have made.  This donation was made possible with support from L’Oreal Paris.

The Born to Run Foundation made its first donation in December 2018, two years after founder Noelle Lambert, 23 of Manchester, NH, lost her left leg in a moped accident on Martha’s Vineyard.  She is a former Division 1 college athlete who played lacrosse at the UMass Lowell and established the foundation to help amputees obtain specialized athletic prosthetic devices so that they can live fulfilling lives. Noelle is a member of the U.S. Paralympic team and is currently training for the 2021 Paralympics in Tokyo in the 100-meter race in Track and Field. On November 13, 2019, Noelle set a new U.S. record at the World Paralympic Championship games in Dubai running the 100-meter in 16.31 seconds.