The Born to Run Foundation Makes its 14th Prosthesis Donation 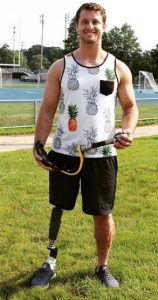 Photo of Tyler Brown courtesy of The Born To Run Foundation

(Boston, MA) – August 10, 2021 – The Born To Run Foundation announced today that it has made its 14th prosthesis donation to Tyler Brown, 25, of Shrewsbury, MA. The Foundation presented Tyler with his new above-the-knee prosthetic running blade at the Para Track Meet and Running Clinic hosted by Adaptive Sports NE, on August 7th in Braintree.

“This donation means the world to me,” said Tyler Brown. “I haven’t been able to run in over six years and having this opportunity thanks to the foundation is amazing. I am very excited to be able to get back into something I used to take for granted.”

Tyler became an above-the-knee amputee in April 2015, after being hit by an oncoming delivery truck while walking. Doctors took immediate action after the accident but were unable to save his right leg.

“We are donating a running blade to Tyler so he can return to his active lifestyle,” said Noelle Lambert, founder of The Born To Run Foundation. “We were thrilled to make Tyler’s presentation during the 2021 Para Track Meet and Running Clinic with Adaptive Sports New England.”

Adaptive Sports New England hosted the 2021 Para Track Meet and Running Clinic, at Braintree High School. The clinic was held by Tokyo 2021 Paralympian Femita Ayanbeku, also a board member of the foundation, and Adaptive Sports NE. During the event, wheelchair racers and runners with and without disabilities competed in 100m, 200m, 400m and one-mile races.

The Born to Run Foundation made its first donation in December 2018, two years after founder Noelle Lambert, 23 of Manchester, NH, lost her left leg in a moped accident on Martha’s Vineyard.  She is a former Division 1 college athlete who played lacrosse at the UMass Lowell and established the foundation to help amputees obtain specialized athletic prosthetic devices so that they can live fulfilling lives. Noelle is a member of the U.S. Paralympic team and is currently training for the 2021 Paralympics in Tokyo in the 100-meter race in Track and Field that begin on August 24. On November 13, 2019, Noelle set a new U.S. record at the World Paralympic Championship games in Dubai running the 100-meter in 16.31 seconds. Noelle was named as a 2020 L’Oreal Paris’ Women of Worth honoree where she was chosen from thousands of nominations for the impact, she and The Born to Run Foundation have made.