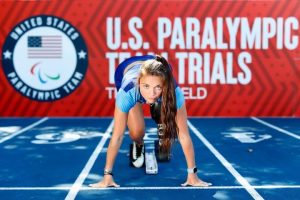 (Boston, MA) – June 24, 2021 – The Born To Run Foundation announced today that its founder Noelle Lambert has been named to represent Team USA at the Tokyo Paralympic games to compete in the 100-meter race in Track & Field at the Tokyo games.  Lambert, an above the knee amputee, will compete in the T63 Division (above the knee amputee). She qualified for the Tokyo Games after placing first in the 100-meter at the U.S. Paralympic team trials in Minneapolis on June 18, 2021, with a time of 16.33 seconds.  The Paralympic games in Tokyo will be held August 24 – September 5, 2021.

“Representing the USA at the Paralympic games in Tokyo is truly a dream come true.  When I lost my leg almost five years ago, I never would have imagined that I would be walking, never mind competing in the 100-meter Paralympic event,” said Lambert. “It took a tremendous amount of teamwork to help me get to where I am today with tremendous support from family, friends, my health providers and the amputee community. I will work hard to make them proud in Tokyo as a member of Team USA.”

Lambert, 24, of Manchester, NH, founded The Born to Run Foundation after losing her left leg in a moped accident on Martha’s Vineyard in 2016.  At the time, she was a Division 1 college athlete who played women’s lacrosse at the University of Massachusetts (UMass) Lowell. She was determined to continue competing and after rehabilitation and training, she returned to the team and scored a goal in her first game after her accident.

During Noelle’s physical therapy, she received support from several foundations that help people with limb differences.  Inspired to also give back to the amputee community, she established The Born to Run Foundation to help young amputees obtain specialized athletic prosthetic devices so that they can live fulfilling lives.

After graduating from college in 2019, Noelle made the decision to train for the Paralympics in Track & Field with the encouragement of other Paralympic athletes, including Femita Ayanbeku of Attleboro, MA who has also been named to the Tokyo US Paralympic team and will compete in the 100-meter in the T64 Division (below the knee amputee). She competed in the Paralympics Games in Rio de Janeiro in 2016. Ayanbeku is also a board member of The Born to Run Foundation.

Since 2018, The Born to Run Foundation has made 13 donations to amputees across the country, allowing them to be active and engaged in sports and other physical activities.  Specialized athletic prostheses are not generally covered by insurance and can cost between $5,000-$50,000.  The Born to Run Foundation has donated running blades, swimming legs and athletic arms.

When foundation donation recipient Ryan Feeney, 10, of Melrose, MA, heard the news that Noelle is going to compete in Tokyo he said, “I am excited for Noelle!  So cool!  I hope this inspires others like she has inspired me.  Since I have received my running blade from The Born to Run Foundation, I have become a more confident athlete.  Good Luck, Noelle!  You will rock the Paralympics!” Feeney received a running blade from The Born to Run Foundation in 2020. He was born with Neurofibromatosis 1 and Tibial Dysplasia and had his right leg amputated below the knee to give him a life with no limits.

The Foundation is hosting a fundraiser, The Born to Run Foundation Summer Shindig, on July 17th at 6pm at the Venezia Restaurant in Boston. Proceeds will go toward donating specialized artificial limbs to young amputees. To purchase tickets click here.