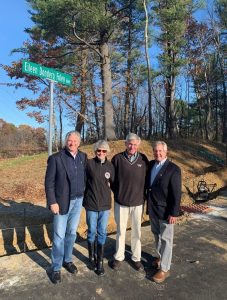 The Kane Company announced  that it has named the road leading to Portsmouth Medical Park “Eileen Dondero Foley Avenue” – in honor of Portsmouth’s longest-serving and beloved mayor, who played an integral role in city affairs and New Hampshire political life for decades.

Foley, who passed away in 2016 just a few days before her 98th birthday, compiled a long and decorated history as a public servant. She served eight terms as Portsmouth mayor and another seven terms in the New Hampshire Senate. She first served as mayor from 1968 to 1971, and then returned to the office for six two-year terms beginning in 1984. In addition, Foley was also city clerk, a member of the school board and Portsmouth’s ambassador to its sister cities in Ireland, England and Japan.

“Portsmouth Medical Park will be a resource for the Portsmouth area that we hope can reflect the great spirit of public service embodied by Eileen Dondero Foley,” said Michael Kane, president and CEO of The Kane Company, one of the region’s largest real estate and development companies. “Eileen was an icon. A real legend in our community. It’s an honor for us to be able to recognize her commitment, her compassion and her dedication in this way.”

“My mother loved Portsmouth and devoted her entire life to this city and its residents,” said Mary Carey Foley, a New Hampshire Justice of the Peace and a retired Portsmouth educator who is the daughter of Eileen Dondero Foley. “She was a strong advocate for this community, a spirited leader for New Hampshire as a legislator, and a tremendous role model for myself and all women. To see this avenue named in her honor is a fitting tribute.”

Barry Foley, Dondero Foley’s son and a longtime Portsmouth city recreation and coaching professional, said his mother would have accepted such an honor with the humble grace that defined her as a public official.

“She attended countless openings, ribbon cuttings, ceremonies and dedications. She cut the ribbon for the Memorial Bridge as a five-year-old in 1923, and she was there to celebrate the start of its renovation and rebuilding 88 years later,” Foley said. “There ought to be a street in Portsmouth to recognize her service to the city and the State of New Hampshire. Now there is, and I know she would appreciate it as we do.”

The commercial leasing space in the first building offers prospective tenants a variety of flexible floor plans that can be customized to their unique needs. The building also features a spacious lobby, energy-efficient glass and contemporary exterior finishes.

Portsmouth Medical Park, which is adjacent to the Jackson Gray medical facility, and steps away from the Portsmouth Regional Hospital, is designed by Manchester-based PROCON.

The first building of Portsmouth Medical Park is scheduled to be completed next summer.

About The Kane Company

The Kane Company is among the region’s largest real estate investment and development companies. The Kane Company is a leading owner, manager, and developer of class A and B real estate. Since the early 90’s Kane has focused on building and acquiring commercial properties, with a portfolio of over 2million s/f of office, retail, hospitality and industrial properties in southern New Hampshire and northern Massachusetts and is one of the largest commercial landlords in Portsmouth. The Kane Company continues to explore investment and development opportunities to expand and grow responsibly. For more information, please visit https://www.kane-company.com/