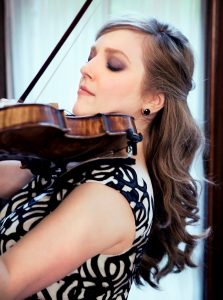 Littleton MA, September 16, 2019 – The Orchestra of Indian Hill will kick off its 45th season with a performance featuring internationally renowned concert violinist Rachel Barton Pine on Saturday, September 21stat the Littleton Performing Arts Center. The critically-acclaimed Orchestra of Indian Hill, under the direction of Maestro Bruce Hangen, is comprised of 70 experienced professional musicians who also perform and teach in high-caliber o

rganizations and ensembles throughout New England

According to her website, “In both art and life, violinist Rachel Barton Pine has an extraordinary ability to connect with people. Celebrated as a leading interpreter of great classic and contemporary works, her performances combine her innate gift for emotional communication and her scholarly fascination with historical research. She plays with passion and conviction, thrilling audiences worldwide with her dazzling technique, lustrous tone, and infectious joy in music-making.”

In addition to performing with the Orchestra at Indian Hill, Pine’s 2019-20 season will include a residency with the Singapore Symphony, and performances with the Royal Scottish National and Seattle Baroque Orchestras, the Madison Symphony, the Tel Aviv Soloists, and at Lincoln Center.

“We’re delighted to welcome Ms. Pine to launch our 45th Season with a performance of Sibelius’s wonderful Violin Concerto,” said Maestro Hangen. The concert will also feature Dvorak’s Symphony No. 9 (From the New World) and Wagner’s Prelude to Die Meistersinger. “These are all classic masterworks by composers from the Romantic period of music: Wagner, who turned music upside down with his revolutionary ideals. Sibelius, who created his own Nordic colorations, harmonies and melodies. And Dvorak, a successor to Brahms but who created a new, American style of symphonic romanticism,” he adds.

Artistic Director and Conductor of the Orchestra of Indian Hill since 1997, Hangen is known for his ability to make music come alive. He is also Director of Orchestral Activities at The Boston Conservatory at Berklee, serving as principal orchestral conductor and director of conducting programs. A frequent guest conductor of the country’s leading orchestras, from New York to Dallas, Hangen led the Boston Pops in almost 300 performances in the last 20 years, and most recently served as Principal Pops Guest Conductor.

The concert begins at 7:30pm. There is a pre-concert talk by Maestro Hangen at 6:30pm and a post-concert Q@A with coffee and desserts. Concert tickets are $20, $35, and $50 on sale now at www.indianhillmusic.org or by calling (978) 486-9524. (Free for Indian Hill Music School students.) The concert is sponsored by Insulet Corporation. Guest artist supporter: Attorney Ray Lyons. Media sponsor: Wicked Local.

World-renowned violinist Rachel Barton Pine will perform with the

The Orchestra at Indian Hill performs with Rachel Barton Pine

Auditorium opens for seating at 7:00pm.

Now in its 34th year, Indian Hill Music is a thriving regional non-profit center for music education and performance. One of only a few organizations in the U.S. that combines a community music school, professional symphony orchestra, diverse concert series, and high-impact outreach, Indian Hill Music serves 79 communities in Massachusetts and Southern New Hampshire. We believe that music inspires both our hearts and minds, encourages the growth of the whole person, and is integral to the lives of everyone we serve. Our mission – to share the transformative power of music, through teaching and performing, and giving music generously when there is need – reflects the impact of music on people’s lives, and its ability to strengthen, heal, and inspire. Indian Hill Music relies on the generosity of individuals, families, businesses, and foundations to support our programs. Learn more at (978) 486-9524 or www.indianhillmusic.org.

Indian Hill Music is creating a world-class education and performance center on a stunning 110-acre landscape in Groton.  Anticipated to open in 2022, the Music Center at Indian Hill will include a 1,000-seat concert hall, a 300-seat performance hall, rehearsal and teaching spaces, state of the art acoustics, dynamic architecture, and lawn seating for summer concerts. The Music Center will be a regional gathering place for music education and performance of all genres for Central Massachusetts and well beyond. Learn more

​The programs of Indian Hill Music are supported in part by a grant from the Massachusetts Cultural Council, a state agency, and with funds from the council administered by the Local Cultural Councils.