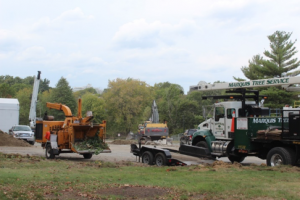 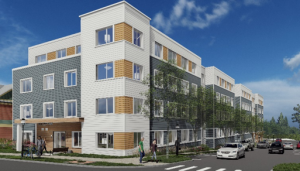 “We are so grateful to the funders for Holtzer Park,” said Emilio Dorcely, Urban Edge’s Chief Executive Officer. “Through their assistance, we will bring new units of much-needed affordable housing to the Jackson Square neighborhood.  Now more than ever, it is clear that quality affordable housing is a necessity in Boston’s Black and Brown communities, and we appreciate the support from both public and private institutions to make this project a reality.”

Named for the Holtzer-Cabot Electric Company, where on the site, electrical devices were manufactured in the 20th century, Holtzer Park will meet the U.S. Green Building Council LEED Homes Gold certifiable standard and utilize a high-efficiency heating system and building envelope. The development team for the project includes Urban Edge, ICON Architecture, and NEI General Contracting.

“This project is a fantastic example of how our strong non-profit partners like Urban Edge are able to layer multiple state, federal, and local funding sources to create opportunities for our families,” said Housing and Community Development Undersecretary Jennifer Maddox. “We are excited to see the Baker-Polito Administration’s investments in the neighborhood, through MassWorks Infrastructure funding, MassDevelopment’s Brownfields program, and our own affordable housing awards help advance this great work.”

“The Life Initiative is proud to have supported Urban Edge’s efforts in the development of Holtzer Park,” said Mollye Lockwood, Vice President at The Life Initiative. “The Holtzer Park project represents a wonderful example of Urban Edge’s ability to forge partnerships to make transformative development happen. After over four years of working with community and its development partners of TCB and JPNDC, Urban Edge has made its project in the 125 Amory master plan a reality and will be providing 62 affordable homes to the Jamaica Plain community.”

“Holtzer Park is a transformative initiative that will introduce much-needed affordable rental housing in a rapidly evolving part of Boston,” said Kenneth Willis, Senior Vice President and Director of Housing and Community Investment at FHLBank Boston. “FHLBank Boston is proud to provide financial support for this transit-oriented project through our Affordable Housing Program, and we’re pleased that it is under development.”

“We are grateful to be involved in the creation of new affordable rental housing at Holtzer Park. We want to thank and congratulate our long-time partner, Urban Edge; the Federal Home Loan Bank of Boston; and our other key partners, especially Boston’s Department of Neighborhood Development and the State, in planning and financing this important development,” said Boston Private CEO Anthony DeChellis. “Boston Private was the lead lender for the construction and permanent financing. We are grateful for Urban Edge’s leadership in bringing together a complex initiative during these extraordinary times with the COVID-19 pandemic.”

“It’s exciting to see underutilized BHA land transformed into such an important use for dozens of low-income families,” said BHA Administrator Kate Bennett. “We are forging exciting opportunities in Jackson Square and I am grateful to all of our partners and staff that have made this happen.”

“Holtzer Park is yet more evidence of the innovative and successful effort to redevelop the Jackson Square neighborhood through the work of community-based non-profit developers,” said Roger Herzog, CEDAC’s executive director. “The project will result in 62 new transit-oriented affordable apartments, and will include supportive housing units. This project will set aside units for people who live with disabilities, as well as families who have experienced homelessness, providing stable, affordable homes to some of Boston’s most vulnerable residents. CEDAC could not be more pleased to support Urban Edge and to help them turn the vision of Holtzer Park into a reality.”

“We are pleased to work with our longtime partner Urban Edge to bring 62 much needed affordable housing units to Boston. We are proud to support such an important project and continue to advance the creation of healthy communities,” said Joseph Flatley, President and CEO of the Massachusetts Housing Investment Corporation.

“MassDevelopment is proud to support the development of Holtzer Park, with both a $27,000 award from the Brownfields Redevelopment Fund last year to assess the site and a $17.2 million tax-exempt bond more recently to aid construction,” said MassDevelopment President and CEO Lauren Liss. “Holtzer Park will add critical affordable housing units for residents of Boston’s Jamaica Plain neighborhood, and we’re pleased to be part of a tremendous team of financing partners helping to make this project a reality.”

For 45 years, Urban Edge has offered a range of innovative programs that help low and moderate income families in and around Boston become economically resilient, establish homeownership, and access needed community resources. Throughout its history, the organization has developed nearly 1,500 units of affordable housing, making it one of Boston’s largest nonprofit developers of affordable housing. Most recently, the agency has been a prime mover in the redevelopment of the Jackson Square neighborhood, creating new affordable housing and commercial space along eight acres of land that border Roxbury and Jamaica Plain. For more information on Urban Edge, visit http://www.urbanedge.org.