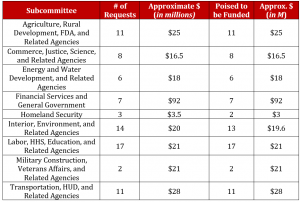 As Chair of the Senate Appropriations Committee, Senator Leahy secured almost all of his 79 project requests, as he secured nearly $250 M for 77 projects in Vermont.  The most substantial category for Senator Leahy was the Financial Services and General Government title, with 7 approved projects funded at more than $90 million. The largest of these projects is an $85 million replacement project for the Highgate Springs Land Port of Entry, which currently experiences significant wait times during peak travel periods due to antiquated design. An additional $3 million was marked for Brattleboro Retreat Farm’s redevelopment of the Grafton Village Cheese Factory to create a multi-purpose food venture center for local farmers, producers, and other small food-related local business.

Senator Leahy provided support to Vermont’s agricultural community with $10 million for the University of Vermont to partner with organizations focused on addressing existing and emerging challenges for rural America. Another $5 million is poised to fund Shelburne Farms’ new National Farm to School Institute to provide technical and practical assistance to programs nationwide. 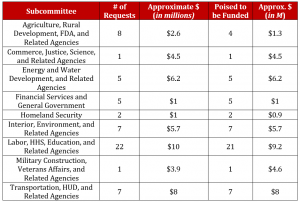 Senator Sanders made the least amount of requests when compared to all participating New England Senators, with just over $40 million for 58 projects. Much like his counterpart Senator Leahy, Senator Sanders had a high success rate for inclusion in relevant subcommittee drafts with 53 projects expected to bring in over $40 million for Vermont. Due to a joint request with Senator Leahy for a new Family Program facility at the VT National Guard HQ, Senator Sanders helped to secure $4.6 million – $700,000 more than he had originally requested for the project. Addressing substance abuse and adult education was a significant focus for Senator Sanders, who made smaller funding requests to benefit community nonprofits and healthcare and housing cooperatives.

Conservation, energy-efficiency, and historical preservation nonprofits were similarly successful with project requests being submitted under the Interior and Environment, and THUD titles by Senator Sanders. This included more than $2 million for VT Adult Learning, VT Care Network, and VT Recovery Network.

Representative Welch requested the most of any NE representative, with $26.7 million requested across his ten projects. Nine of Welch’s projects are poised for funding at a total of $9.3 million – the missing project was slated to bring $16.4 million to Vermont’s Army National Guard for renovation of their firing range to qualify as a national competition site. Of the approved projects, the Congressman’s focus centered around recreational and historical renovation improvements for VT nonprofits, addressing food insecurity, and workforce development. Notable projects that are expected to receive funding included $2.4 million for the expansion of Fairbanks Museum and Planetarium’s science exhibitions, more than $1.5 million for the VT Farmers Food Center Agricultural Program, and $2 million for the redevelopment of former manufacturing sites to retain jobs and create new opportunities for employment.